I found this quote in the Butterworth book, Spiritual Economics. 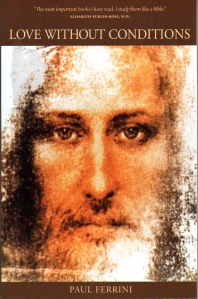 I read this amazing book this week called Love Without Conditions.  The author does not present himself as a channeler, but the book is in essence channeled.  So the entire book comes through Ferrini from Jesus.  The following is one of the quotes I underlined while reading:

“I ask you to remember that everything that you think about, say or do to another person reflects back to you what you think of yourself.  A negative thought about someone else demonstrates how you see yourself.  Verbal abuse of others indicates your own feelings of shame and emotional rejection.  And physical violence toward another indicates your own suicidal impulse.”  -“Jesus” through Paul Ferrini

Clementine: Too many guys think I’m a concept, or I complete them, or I’m gonna make them alive. But I’m just a fucked-up girl who’s lookin’ for my own peace of mind; don’t assign me yours.
Joel: I remember that speech really well.
Clementine: I had you pegged, didn’t I?
Joel: You had the whole human race pegged.
Clementine: Hmm. Probably.

Joel: I could die right now, Clem. I’m just… happy. I’ve never felt that before. I’m just exactly where I want to be.

Mary: Adults are, like, this mess of sadness and phobias.

Howard: Simultaneous speech “We’ll dispose of these mementos when we’re done here, that way you wont be confused by their unexplainable presence in your home

We watched The Curious Case of Benjamin Button the other night.  I was very moved by it, on the edge of my seat despite it’s 2 hour and 45 minute duration.  If you haven’t seen the movie, I should probably say *spoiler alert*.

The main character, Benjamin, is born a decrepit (harsh, but probably the best word for it), little old man.  His mother dies in childbirth and his father, horrified by his appearance, abandons him on the steps of the local Nursing Home.   Queenie, takes him in and raises him amongst the residents, assuming he has a very short time to live.  Over the years he, of course, grows younger instead of older (at least on the outside).  In his old man’s body he strikes up a friendship with a young girl named Daisy.  He and Daisy connect because they are actually nearly the same age.  It is this relationship that is the foundation of the movie.  Their outer appearances place each of them in categories that keep them separate.  It is only when they’ve each faced tremendous loss that they are brought back together again.  These years together are the ones in which their “ages” match.  But the different directions they are traveling loom over them and eventually Benjamin leaves so that Daisy will not have to care for him as a child.  As fate would have it a little boy, in the beginning stages of dementia, ends up back at the Nursing Home and Daisy is called.  She cares for him as he returns to infancy.

Throughout the movie you love Benjamin.  He is different and faces challenges, but has a beautiful soul.  You want him to be accepted and understood.  Then there is Daisy and she is just so very human.  I got angry at her, but probably because I could relate to her in ways.  She loved him but chose to move on without him.  It took a tragedy that ruined her career to bring her home to him.  Once with him, she redeemed herself and unselfishly chose to let him go and eventually take care of him at the end of his life.

The main theme in this movie was Death…but not just death as death, but death as change.  Benjamin grows up in a world filled with death (a nursing home where residents go at the end of their lives), and because of his uniqueness always has the threat of death in the shadows.  He learns early on that nothing is constant, everything is in motion and you can’t stop time.  One of my favorite quotes from the movie that speaks to the theme is from the character who teaches him to play the piano.  She says: “Benjamin, we’re meant to lose the people we love. How else would we know how important they are to us?” Death teaches us to stop taking life for granted.  In the death of a relationship we learn the gifts that were given us by the person we lost.

There was so much more to this movie.  It was thick,  full of layers and life lessons.  It showed the reality of people…that sometimes they are exactly who they say they are and sometimes what we think we know is very far from the truth of them.  It put a spotlight on relationships and the fact that none of them last forever.  It illustrated fate and the great production we’re all a part of, every action and line matters.  It reminded me of the opportunities that life provides and how it is up to each of us to take them or leave them.

I’ll leave you with a few memorable quotes:

“For what it’s worth: it’s never too late or, in my case, too early to be whoever you want to be. There’s no time limit, stop whenever you want. You can change or stay the same, there are no rules to this thing. We can make the best or the worst of it. I hope you make the best of it. And I hope you see things that startle you. I hope you feel things you never felt before. I hope you meet people with a different point of view. I hope you live a life you’re proud of. If you find that you’re not, I hope you have the strength to start all over again.” -Benjamin Button

“You can be as mad as a mad dog at the way things went. You could swear, curse the fates, but when it comes to the end, you have to let go.” -Captain Mike

“Your life is defined by its opportunities… even the ones you miss.” -Benjamin Button

“Sometimes we’re on a collision course, and we just don’t know it. Whether it’s by accident or by design, there’s not a thing we can do about it.” -BB

“I promise you, I’ll never lose myself to self-pity again.” -Daisy

“You’ll see little man, plenty of times you be alone. You different like us, it’s gonna be that way. But I tell you a little secret I find out. We know we alone. Fat people, skinny people, tall people, white people… they just as alone as us… but they scared shitless.” -Ngunda Oti

I needed a quote for today and when there isn’t anything fresh in my mind I always pull out “Notes From the Universe.”  The first page I flipped to answered my own personal question.  A new person has arrived in my awareness.  I am uneasy about it.  I am hoping for the best, really being very hopeful, but looking closely for “the catch.”  This issue was weighing on my mind as I flipped open “Notes” and it is not surprising that this was the message:

“For all the reasons that you might draw someone into your life…one would never be to find their faults.”

I flipped the page again wanting a more general message to put up for all of us and this is what I got:

“Let’s pretend, just for today, all day long, throughout our every thought and decision, that life is easy, that everyone means well, and that time is on our side. Okay?  And let’s pretend that we are loved beyond belief, that magic conspires on our behalf, and that nothing can ever hurt us without our consent.  All right?  And if we like this game, we’ll play tomorrow as well, and the next day, and pretty soon, it won’t be a game at all, because life, for us, will become those things.  Just as it’s become what it is, today.  Thoughts become realities, too.”

It has been raining a lot here lately and a few days ago, I came to my WordPress Dashboard and quickly typed “Rain” as the title of a blog post.  Today I read this quote on one of my friend’s Facebook Status updates:

“Life isn’t about waiting for the storm to pass….It’s about learning to dance in the rain.”

That quote made me want to revisit or rather write my post on the topic.

I’ve never much liked rain.  Rainy days make me sleepy and depressed.  No matter how “needed” it is, I’m always the one wishing it away.  When I was a teacher, rainy days were the worst because that meant that the kids had to stay indoors.  No recess for the kids, no rest for the teachers.  It was the same when I was a kid.  I’d much rather have been outdoors then inside playing “heads up, seven up” (or whatever that game was called).  I also don’t like to be in the rain.  Yuck!  There is nothing worse than getting rained on and stepping into puddles.  Squishy shoes suck!

This summer I have had to face my hatred for rain head on.  It started on the drive home from NC. (Did I mention I hate driving in the rain too?)  We had been driving for 3 or so hours and the girls needed a potty break.  It started pouring right as we found a rest stop.  The next one was 60 miles away and I didn’t want to get too far off the interstate, so we stopped, rain and all.  I unbuckled the girls, pulled them out of the car and proceeded to drag them as fast as their little legs could go to the cover.  Run, Run, Run!!  By the time we made it to the restroom we were pretty wet.  As we left the bathroom we discovered it was raining even harder.  I weighed my options, but decided staying on schedule was more important than staying dry, so we left the shelter and made a run for it.  Midway to the car, I looked at the girls and how delighted they were to be experiencing this rain and I decided to slow down.  I walked the rest of the way to the car, paying attention to the way the rain felt on my skin, and realized that it was wonderful.  Once in the car, the water dried quickly…no permanent damage was done.

Last Sunday afternoon, Mark and I took the girls for a walk to the pond at the end of our street.  I love going down there.  We sit in the gazebo and feed bread to the fish and turtles.  It’s become one of my favorite spots, a place that always calms me.  On Sunday though, it started raining.  Mark was quick to suggest we go, so we left the shelter of the gazebo and headed back towards our house.  Before long the sky fell out and Mark grabbed the girls’ hands yelling “Run, Run, Run.”  I did the opposite.  I slowed my pace, held out my arms, tilted my head back, and let nature remind me how alive I am.  I didn’t dance though…maybe next time I’ll try that!